Welcome to my stop on the blog tour! 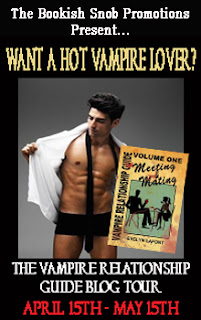 The blog tour is being hosted by Bels at The Bookish Snob and
you can get to the complete tour schedule by clicking HERE!
Today, please welcome Evelyn Lafont.
She is the author of Vampire Relationship Guide!

I have just finished reading volume one - Meeting and Mating!
You can read my review here.
On to the interview! 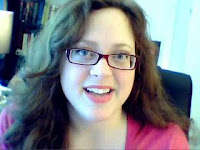 I actually don’t think I realized it until I started doing it for fun. I’ve written marketing and training materials for companies for years but didn’t realize that I actually wanted to be a writer until I started creating some funny, satirical pieces. Maybe about 4 years ago.
 How many jobs did you have before you became a writer?

 How long does it take you to write a book?

It really depends. Since I work for myself, it doesn’t take very long to get a first draft done because I can work my freelance schedule around my fiction schedule which means I don’t have to squeeze fiction writing into an already restrictive schedule or stop when I’m on a roll.

I do this thing that my best friend noticed. Whenever I’m writing a scene of conflict and there is some sassy dialog, I turn my head to the side and start pulling away from my monitor. I have no idea why. Also, I blush and start sweating when I write sex scenes…which is so not hot.

 Do you have a routine that you use to get into the right frame of mind to write?

I don’t have a routine but ideally, I like some Starbucks next to me (hot or cold, depending on the weather) some nice smelly stuff in the air, quiet music and no one else around. Also, it really helps when there’s not a cat lying on my keyboard.

Everywhere. I have an absurd sense of humor, so most of the time in my head there’s this voice going, “Oh my God, wouldn’t it be funny if….” Then, I want to write a story about whatever I was thinking to see what will happen and whether or not it is, in fact, funny.

When I get visuals of scenes, I know it’s time to go ahead and get to writing. If it’s just a concept with no visual hallucinations accompanying it, I leave it in the brain bin for later.

About you as a person:

 Are you a dog person or a cat person?

Do I have to choose? Okay, cats because they aren’t quite so needy.

 What books have most influenced your life?

It’s weird, because these are not my favorite books, but the Alex Delaware series by Jonathan Kellerman have probably had the biggest influence on where I am right now. I started reading them before I became self-employed. I was so jealous of the main character, Alex Delaware, because he got to feed his fish any time of day, go running whenever he wanted, and basically run his life however he pleased because he was self-employed. I remember thinking, “I could do that.” At the time, I didn’t really know how I could…but I suspected I’d find a way—and I did.

I like to read, watch movies and television, listen to music, wax philosophical with Hubby, go to the beach, spend time with friends—just normal stuff.

 What is your favorite comfort food?

Ben and Jerry’s, every time.

 What do you think makes a good story?

 Who would you consider your favorite author and why?

I honestly can’t think of a favorite. Anyone who has the courage to put pen to paper (or fingers to keyboard) and then release their creation for others to read is admirable.

 What book, if any, do you read over and over again?

I love Tess of the d’Urbervilles, Lord of the Rings, Harry Potter, Little Women, Pride and Prejudice, Emma, Southern Vampire Mysteries…and so many more…

Evelyn is giving away the chance to beta read her next book as a finale to the tour. 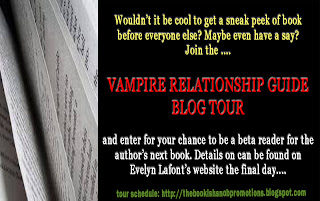 Thanks for stopping by The Wormhole!
Posted by Beverly at 6:01 AM 4 comments