Release Day Blitz: The Darkness of Light by Tammy Farrell

Welcome to The Wormhole and my stop on the Blitz! 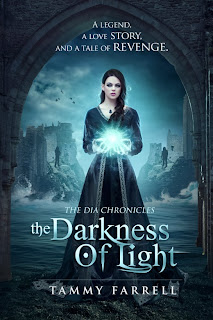 The Darkness of Light
The Dia Chronicles
Book One
Tammy Farrell

Book Description:
The world has long forgotten them, but their descendants live on, not wholly mortal or god, but something in between…

At the dawn of the sixth century, in the aftermath of her mother’s brutal execution, Mara Black is forced to flee the only life she has ever known.

Mara can tell she’s different, but isn't sure why. After she encounters two mysterious strangers, she discovers her secret is but a drop in an ocean of many. She is a Dia, a descendant of ancient gods, and her mother sacrificed herself to protect Mara from their past.

Summoned by an uncle she didn't know existed, Mara thinks she’s found the family she’s always wanted, and Corbin, a love she never thought possible. But not everything is as it seems. Her uncle has other motives for protecting her, and her mentor, Malcolm, becomes so jealous, he’ll do anything to get what he wants.

When tragedy strikes, and the true darkness among them comes to light, Mara discovers that sometimes love can give you everything, and obsession can take it all away. With her powers gone, and destiny calling, she has to look deep within to find the courage to save herself. Mara, along with Corbin and her newfound family, must fight to get back what was taken, or die trying.

About the Author:
Tammy Farrell grew up in Orangeville, Ontario Canada where she discovered her love of writing, and all things related to Edgar Allan Poe. She now lives with her husband and four fur babies in Greenville, South Carolina, where she teaches pre-GED English and attempts to learn French when she isn’t busy writing.
www.TammyFarrell.com    @Tamzwrite


a Rafflecopter giveaway
Posted by Beverly at 4:30 AM

I've been seeing this book around the blogs today - it looks really interesting. I love the cover!