Welcome to The Wormhole and my day on the tour for
The Color of Evil by Connie Corcoran Wilson.
It is my pleasure to feature an interview ~ enjoy. 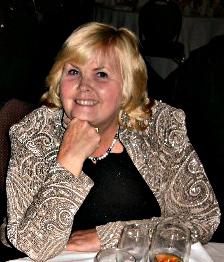 
I have written, for pay, for 56 years. Winning a poetry competition in 6th grade ($50 Catholic diocese prize) got me started. In 1985, I quit my tenured teaching job (Silvis Jr. High, IL) to become an educational writer for Performance Learning Systems, Inc. ().

? How many jobs did you have before you became a writer?
I’ve had part-time jobs at 5 newspapers and numerous blogs, and taught junior high school for 17 and ½ years. I think I have had about 5 full-time jobs and 20 part-time jobs, [not counting my high school jobs as a car hop or swimming instructor or my college job selling clothes.]  I’ve been writing for pay since age 10. I did feature stories for my hometown newspaper (the Bulletin Journal & Conservative) when I was 10 years old and was Editor of my high school paper. I graduated from the of with a degree in English and Journalism and went on to earn a Master’s degree from with additional study (30 hrs.) at , and the . My student teaching at the high school level was in an NCTE-approved teacher program, teaching writing and literature at the University of Iowa Laboratory School. After marriage, I taught for close to 20 years at the junior high school level (7th and 8th graders) as Department Chairperson at (). [During that time, I had a part-time job as film and book critic for the Quad City Times newspaper (), which was the basis for my 2010 book It Came from the 70s: From The Godfather to Apocalypse Now.]  I quit my tenured teaching job to write for PLS. After writing their book Training the Teacher As A Champion, I founded a (in ) in 1986. In 1995, I founded a , a computerized testing center responsible at that time for licensing all nurses in , as well as giving NASD Series 7 exams, and 248 other licensing exams. I functioned as CEO of those 2 businesses from 1986 until 2003. In 2003, I sold both businesses to concentrate, full-time, on the writing I taught as adjunct faculty at 6 IA/IL colleges between 1985 and 2003. I established Quad Cities’ Learning, Inc., a publishing concern.

? How long does it take you to write a book?
It depends on the book(s). When I was hired to write 3 volumes of Ghostly Tales of Route 66 by Quixote Press, my husband and I drove Route 66 in 10 days taking pictures, doing research, attending the Fort El Reno Ghost Tour, and collecting (supposedly) true ghost stories. Each book was 18,000 words with pictures. I wrote each book in a week after traveling the from to . With my first novel (Out of Time, Lachesis Press), I wrote for 3 years. For my second novel (The Color of Evil), the first in a trilogy, the book took a year. I had 2 new books out in 2011 and I will have 2 new books out in 2012 (The Color of Evil and the sequel to Hellfire & Damnation, a collection of short stories entitled Hellfire & Damnation II for a small, independent Rhode Island publisher, The Merry Blacksmith.(www.HellfireandDamnationTheBook.com).

? What would you say is your most interesting writing quirk?
It may not be that interesting, but I set out, originally, to write “one of everything.” I wanted to find out what I enjoyed writing the most. I’m leaning towards genre fiction,  but I do have 2 books of humorous essays (Both Sides Now, Laughing through Life) out, and at Christmas this past year I published a full-color illustrated children’s book for my 3-year-old twin granddaughters. (The Christmas Cats in Silly Hats). I even tried a screenplay based on my first novel; it was one of the winners of a “Writer’s Digest” competition.

? Where do you get your ideas or inspiration for your characters?
In my next short story collection (Hellfire & Damnation II), due out by Labor Day, I explain where I got the inspiration for each story in the collection. For The Color of Evil, I am describing students I taught for close to 20 years.  I sometimes write what I know. At other times,  something I read will inspire a short story, as, for example,  reading about the sale of organs in foreign countries inspired The Bureau, [a short story which is on Amazon for 99 cents as a “teaser” from the new short story collection. (H&D II)]

? How do you decide what you want to write about?
I wanted to attempt to write a YA novel with cross-over appeal. The Color of Evil is it. I taught this level for almost 33 years. The setting is , , which is very close to where I grew up in .

? What books have most influenced your life?
As an English major at , I had to read so many great authors: William Faulkner, Ernest Hemingway, Graham Greene, F. Scott Fitzgerald, Charles Dickens, writers from all decades and nationalities. I actually attended school when John Irving was also a student at . The teachers in ’s Writers’ Workshop at that time were Nelson Algren and Kurt Vonnegut. I interviewed Vonnegut at age 19 for one hour of Special Project in the class “American Humor & Satire.” I can’t name just ONE book that has influenced my life the most, but I have always admired John Irving’s The World According to Garp and Kurt Vonnegut’s God Bless You, Mr. Rosewater, or Pearls Before Swine. Among genre writers, I enjoy Stephen King, Peter Straub, Jonathan Maberry, William F. Nolan and many, many more.

? What are you reading right now?
I just finished reading Stephen King’s 2008 short story collection Just After Sunset and his Stoker-winning novel from this year, 11/22/1963. I am now reading the Hunger Games trilogy. I have The Room on my list, enjoyed The Help, and am going to be reviewing some genre fiction soon for a couple of publishing houses, ThrillerWriters, and potentially “Publisher’s Weekly.” The last book I reviewed was The Devil’s Coattails, a short story anthology from Jason V. Brock and William F. Nolan (Logan’s Run). [William F. Nolan has been tremendously supportive of my writing.] I review on my own blog (www.WeeklyWilson.com) and on www.Wikinut.com, and interview authors sometimes for Yahoo.

? What do you like to do when you are not writing?
I’m writing this from on the 11th day of a 14-day vacation with 16 family members. We’ve been coming here at Easter for 18 years.  I like to read, travel (especially to warm weather beach locales), play “Hanging with Friends” and “Words with Friends” when not writing. I routinely write for several blogs for Yahoo, among others. I also have a second home in , (my Writer’s Lair.) I will be attending a fund-raiser for the Buffalo Bill Museum in LeClaire, Iowa (reading a short story I contributed to an anthology), will be in Chicago for Printer’s Row in June, will be launching The Color of Evil upon my return from Cancun at a local bookstore, attending ThrillerFest in New York City in July and traveling to the Spellbinders’ Conference in Hawaii over Labor Day. I’m also on the poetry Stoker Jury. We hope to visit our daughter in right after New Year’s.

? What is your favorite comfort food?
Diet Dr. Pepper, preferably in a can, not a bottle.

? What do you think makes a good story?
Again, it depends on whether you mean a novel or a short story. I like short stories to have interesting endings, not just fade away. I like to read or write characters that the reader will be able to identify with, so that they will care what happens to them. Then I let the characters lead me through the story.

? Who would you consider your favorite author and why?
I don’t think I can single out just one “favorite” author. I genuinely enjoy reading Stephen King. I also have interviewed some wonderful writers, like William F. Nolan, David Morrell, Frederik Pohl and Kurt Vonnegut, Jr. I’m going to have to reserve judgment.

The Color of Evil by Connie Corcoran Wilson

Amazon Product Description:
Tad McGreevy has a power that he has never revealed, not even to his life-long best friend, Stevie Scranton. When Tad looks at others, he sees colors. These auras tell Tad whether a person is good or evil. At night, Tad dreams about the evil-doers, reliving their crimes in horrifyingly vivid detail.
But Tad doesn't know if the evil acts he witnesses in his nightmares are happening now, are already over, or are going to occur in the future. He has no control over the horrifying visions. He has been told (by his parents) never to speak of his power. All Tad knows is that he wants to protect those he loves. And he wants the bad dreams to stop.


At Tad's eighth birthday party (April 1, 1995) in Cedar Falls, Iowa, the clown his parents hire to entertain Tad's third-grade classmates is one of the bad people. Pogo, the Killer Clown (aka Michael Clay) is a serial killer. So begins 53 nights of terror as Tad relives Pogo's crime, awakens screaming, and recites the terrifying details to his disbelieving family. The situation becomes so dire that Tad is hospitalized in a private institution under the care of a psychiatrist--who also does not believe the small boy's stories.

Happy Reading - Thanks for stopping by The Wormhole.
This virtual book tour is presented by Teddy Rose at Virtual Author Book Tours.
The next stop on the tour is: Laurie Reader Girls
And then it's on to: Donna's Home Blog for the last day.
Posted by Beverly at 5:00 AM

Thanks so much for taking part in the tour.