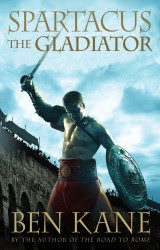 This virtual book tour is presented by Teddy Rose of  Premier Virtual Author Book Tours.
Click HERE to see the entire tour schedule.
Welcome to The Wormhole and my day on the tour.
It is my pleasure to feature Ben Kane and his book
Spartacus: The Gladiator.

Ben Kane was born in Kenya and raised there and in Ireland. He qualified as a veterinary surgeon from University College Dublin, and worked in Ireland and the UK for several years. After that he travelled the world extensively, indulging his passion for seeing the world and learning more about ancient history. He drove around the USA in a camper van, trekked the Inca trail and took a ship to Antarctica. Seven continents and more than 65 countries later, he decided to settle down, for a while at least.
While working in Northumberland in 2001/2, his love of ancient history was fueled by visits to Hadrian’s Wall. He naïvely decided to write bestselling Roman novels, a plan which came to fruition after several years of working full time at two jobs – being a vet and writing. Retrospectively, this was an unsurprising development, because since his childhood, Ben has been fascinated by Rome, and particularly, its armies. He now lives in North Somerset with his wife and family, where he has sensibly given up veterinary medicine to write full time.
To find out more about Ben and his books visit: www.benkane.net
You can also find him on Twitter: @benkaneauthor and Facebook: https://www.facebook.com/#!/benkanebooks

Spartacus: The Gladiator:
Long the stuff of legends, Spartacus is known to most modern readers through the classic Kubrick film version of Howard Fast’s novel. Now bestselling historical novelist Ben Kane returns to the source material and presents a lively and compelling new vision of the man who was Spartacus—Roman army auxillary, slave, gladiator and ultimately the leader of an army of slaves who nearly brought Rome to its knees. Ben Kane’s brilliant novel begins in the Thracian village to which Spartacus has returned after escaping from life as an auxiliary in the R oman army. Jealous of his attachment to Ariadne, a Dionysian priestess, the Thracian king betrays Spartacus to the Romans who take him, along with Ariadne, into captivity and to the school of gladiators at Capua. Against the background of the unbelievable brutality of gladiatorial life, Spartacus and Crixus the Gaul plan the audacious overthrow of their Roman masters. They escape and flee to Vesuvius, where they recruit and train an army of escaped slaves that will have to face the conquerors of the known world, the most successful deadly army in all of history in a battle that will set in motion the legend that is Spartacus.

My Thoughts:
I was thrilled when the opportunity to read and review this book arose.  Spartacus has always been one of my favorite movies (Kirk Douglas - need I say more) and this is the first book I have read about Spartacus and my first Ben Kane read as well.
I have to begin with - Wow!  Ben Kane does a fantastic job of telling this story.  The book reads like a movie playing on the pages, which seem to all but turn themselves.  This was a thrilling, graphic, violent, gritty tale and Ben Kane has done a fine job of bringing it to life for his readers.
The characters in this book are carefully created and vividly described.  As I read, I found myself curious, outraged, shocked, saddened, hopeful, and cheering many times throughout the book.  These are characters that you easily become emotionally attached to.
Ben Kane has brought life in 74 BC to his book with a wonderful mix of historical fact and fiction, making this book hard to put down.  My only complaint is the language.  I find it hard to believe that with his careful attention to names, places, weapons and such that he found it necessary to include rude, 21 century, cursing.  I didn't find the use of the profanity to in any way augment the story or the characters.  I am not implying that there is never a place for such language, only stating that I found the use of it in this book to actually detract from the story.  It just doesn't fit.
One the whole - a wonderful read.  If you enjoy historical fiction this is a must read.
You can buy a copy of this book by clicking HERE.
Posted by Beverly at 5:00 AM

Thanks so much for taking part in the tour. I'm so glad you enjoyed the book so much! I did some checking and the foul language used was used back then.

@Beverly
Thanks for your review: I'm glad you enojoyed the book!

Re the cursing: it's not all 21st century. The Latin verb 'futuere' means 'to f***', so they would have been using the word, or a version of it, I'm afraid. The Roman curses that survive are very 'ripe' indeed, so any idea that people didn't curse back then is a mistake. One could argue that it's not necessary to include it, but I felt it added to the authenticity. Sorry that you didn't like it.
Very best wishes
Ben