Review: Legend of the Oceina Dragon by J.F. Jenkins 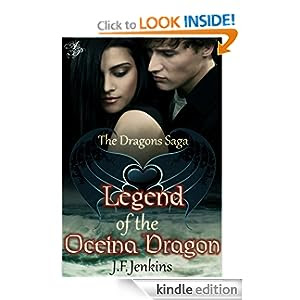 Legend of the Oceina Dragon: The Dragons Saga Book 1 by J.F. Jenkins

***I received this book in exchange for an honest review

Amazon Product Description:
Darien Oceina is the youngest son of the Great Dragon Lord of the Water. For years he's loved and cherished Tai Dawson from afar. Tai is a simple, ordinary girl who doesn't even know Darien exists. On his eighteenth birthday, he chooses her as his wife. But there’s one problem: She thinks his choice means she's going to be offered as a sacrifice to the Dragon Lord, but instead, she’s forced to move to his home, far away, to give up her life and be his bride.

When she first sees Darien after the ceremony, she doesn’t expect to feel anything but hatred toward him. The two are struggling with the complications of a new marriage when their nation is attacked by a rival dragon species. Together they learn to love one another while they struggle to stay one step ahead in a game where the prize is their survival.
My thoughts:
This was my first dragon shifter story.  I was impressed.  I was fascinated by the imagination and creativity that went into creating the dragons, their powers, and their world.
The characters are fabulous.  Every young man should have a bit of Darien in them (although there were moments in the beginning where I worried he would be wishy washy - he's not)!  Tai is a great combination of independence, strength, stubborness, and vulnerability.  The author has created wonderfully developed characters that tug at your heart from the start.
The world she has built for them is complex and modern, but still holds to traditions and superstitions that seem outdated.  I can't imagine a world in which a girl can attend high school with honors courses in science, but still end up being the sacrifice to the dragon god.  Good thing that JF Jenkins could so she could bring us this great story.
The story is nicely paced and easy to follow.  It is filled with mystery and intrigue, as well as wonder, faith, love, betrayal, loyalty, sorrow and joy.  I found myself emotionally invested in the story early on and was sad to turn the last page.

Don't miss out on reading this one!
You can buy a copy of this wonderful story by clicking HERE.
You can also stop back tomorrow for the blog tour here at The Wormhole and enter to win an ecopy of this and the next book in the Dragon Saga: Legend of the Inero Dragon.
Posted by Beverly at 8:00 AM