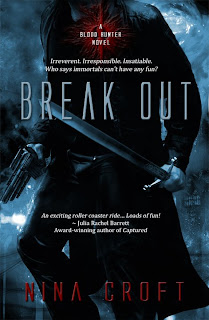 Break Out :
BLOOD HUNTER SERIES - Book One by Nina Croft
Book Description: (from publisher)
Irreverent. Irresponsible. Insatiable. Who says immortals can't have any fun?
The year is 3048, Earth is no longer habitable, and man has fled to the stars where they’ve discovered the secret of immortality—Meridian. Unfortunately, the radioactive mineral is exorbitantly expensive and only available to a select few. A new class comprised of the super rich and immortal soon evolves. The Collective, as they’re called, rule the universe.
Two-thousand-year-old Ricardo Sanchez, vampire and rogue pilot of the space cruiser, El Cazador, can’t resist two things: gorgeous women and impossible jobs. When beautiful Skylar Rossaria approaches him to break a prisoner out of the Collective’s maximum security prison on Trakis One, Rico jumps at the chance. Being hunted by the Collective has never been so dangerous–or so fun!
My thoughts:
I have never read a book like this before.  Nina Croft has crafted a tale of suspense with a vampire as a main character set in a science fiction world!  Oh - and she added a spicy romance as well!!!
The story is both clever and original.  The characters are fantastic.  They are creatively developed with both well constructed personality traits and appearances.  Rico, who is portrayed as a shallow womanizer, becomes moral and driven with a depth that surprises himself and the reader.  Skylar is left to face a reality that is foreign and terrifying to her, forcing her to search her heart for honesty and answers.  The descriptions of the characters bring them to life in full color from the vivid imagination of the author.
Nina Croft's writing style makes the story come alive to the point that I could "see" the characters while I read.  The ending, although satisfying, leaves room for more to come and I can't wait!!!
Posted by Beverly at 2:13 AM

Thanks for your review!! I've been following along on this tour and I am really excited about this book and can barely wait to read it.
Laurie
Laurie's Thoughts & Reviews