Blog Tour: Give Me by L.K. Rigel 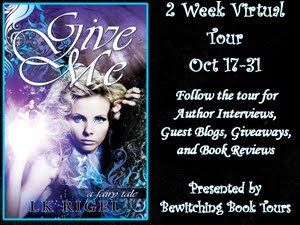 This virtual book tour is presented by Bewitching Book Tours.
Click HERE to see the entire tour schedule.
Welcome to The Wormhole and my day on the tour!
It is my pleasure to present L.K. Rigel and Give Me. 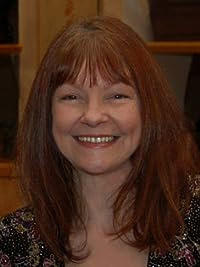 Author Bio:
LK Rigel lives in with her television-watching cat, Coleridge. (His favorite show is Castle, but he was enthralled by Game of Thrones.) Rigel wrote songs for the 90's band The Elements, scored the independent science fantasy karate movie Lucid Dreams, and was a reporter for the Sacramento Rock 'N Roll News. Her work has appeared in Literary Mama and .

Rigel writes the postapocapunk "Apocalypto" series about the end of the world and the new reality in which the gods return to save humanity from itself - and end up fighting with each other.Her short story "Slurp" about an author with muse problems on Halloween is included in DEADLY TREATS, Anne Frasier's Halloween anthology published by Nodin Press.Her latest book, GIVE ME, is an adult fairy tale about possession.website: http://www.lkrigel.com/ 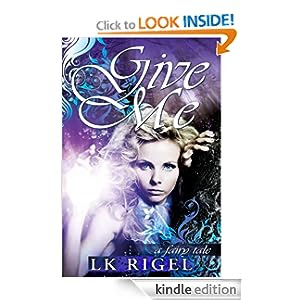 Give Me: a fairy tale
Copyright 2011 L.K. Rigel
Published by LK Rigel
Edited by Debra L. Martin
Cover by Robin Ludwig Design
A young witch with a good heart. Two lovers in mortal danger. A spell that ends in disaster.
Lilith Evergreen lives in the desert, an ordinary woman until her fiancé returns from with a ring he bought from a street vendor. When Lilith puts it on she dreams of a green land that's anything but desert, a tree at cliff's edge, a ruined castle, and a handsome prince.
Then she discovers that it's all real.
When Lilith visits the ruins of , she discovers a world of magic and love - and its dark side when she's entangled in the remnants of an ancient spell gone bad. From the moment Lilith sees Cade Bausiney, she's overwhelmed with desire for him. Cade is drawn to Lilith too - but their feelings might only be sparked by dark and dangerous magic.

Lilith and Cade must break the old spell or be forever possessed by spirits who've waited a millennium to consummate their love.