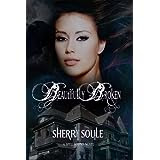 ***I received this ebook at no charge in exchange for an honest review.

They say every town has its secrets, but that doesn’t even begin to describe Whispering Pines. The townsfolk are a superstitious lot and the mystical disappearance of a local teen has everyone murmuring about a centuries old witch’s curse.

Sixteen-year-old Shiloh Ravenwolf is a heritage witch from the Broussard family, a family both destined and cursed. When she takes a summer job at Ravenhurst Manor, she discovers a ghost with an agenda. That’s where she meets the new town hottie, Trent Donovan, and immediately becomes spellbound by his charms.

Finally, Shiloh's met someone who is supercute and totally into her, but Trent may be the next victim on the supernatural hit list. And Shiloh is the only person with the power to save him. Complicated much?

It sucks to have a destiny, especially since Shiloh would rather spend her summer being a normal girl who worries about clothes and boys, not the supernatural. But she’s never been normal and the stranger things become the more her own magical senses awaken.

With cryptic messages from a pesky wraith, she will begin to understand the mysterious significance of the strange mark branded on her wrist and decide how much she's willing to sacrifice to protect the other teenagers in town.

Unfortunately, for Shiloh, not all ghosts want help crossing over. Some want vengeance.

My Thoughts:
Wow! This is a fantastic read!  It is captivating!  Brilliantly written.  This alluring tale is original and yet classic at the same time.  It is more than just your average story of good (light) versus evil (dark).  This is a story of jealousy, greed, betrayal, sacrifice, desire, and love.  It is a story of what happens when what a person wants corrupts them into doing the unthinkable, and the results of that corruption.  I was left wondering...what price is too high?

The characters are fantastic.  They are creatively and carefully constructed.  Their lives, relationships, interactions, and emotions are so realistic that I was instantly invested in their lives.  Each of the characters is living through trauma and/or some kind of personal drama that they are forced to struggle with every day.  The characters are given strong personalities and I found myself on an emotional rollercoaster with them as the story progressed.


Sherry Soule has created a mystery steeped in history and heritage, and hidden by fear, lies, deception and secrecy.  I was thrilled with the witchcraft/Wiccan/Native American Shaman combination of magic.
The plot twists and turns, by the end of the book I was hanging on to my seat unable to read fast enough to find out more!  Now, I can't wait for the next book in the series!

Sounds like an interesting mix of magic types. May look in to this one. Great review!

Thanks for the outrageously awesome review. I hope your followers appreciated the post and are interested in reading my debut novel, Beautifully Broken. :-D