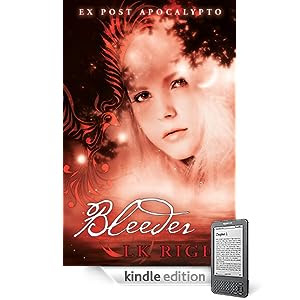 Bleeder by L.K. Rigel (book 3: Apocalypto series)
*I received this book (digital copy) in exchange for an honest review and participation in the blog tour.  The blog tour is being hosted by The Bookish Snob Tours.


NOTE: Bleeder contains sexual content, including graphic scenes. Not recommended for younger readers.
Equivalent to approximately 428 pages in print.
= = =
The King of Garrick wants to kill her.
The King of Allel wants to love her.
And shapeshifters stole her baby's soul!

It's been a hundred years since sea-level rise and global nuclear war wiped out most of humanity. Mallory is a chalice, one of the world's rare fertile females who contract with the kings of the Concord Cities to provide natural-born heirs.

It was supposed to be a pampered and easy life, but Mal becomes caught between King Garrick's scheme for world domination and the goddess Asherah's desperate plays for another god's attention.

In her struggle to survive, Mal must confront the most terrifying threat of all -- the truth of her past and the inevitability of her destiny.
My thoughts:
What to say about this story...it's like nothing I have ever read before.  Mallory starts her life as an orphan and becomes a bleeder, then a chalice.  This is a whole new spin to surrogate mother.  The chalices are trained in many things from history and religion to self defense and kama sutra.  They are trained to control their emotions as well as their bodies, so in tune that they can change their body temperature to control fertilization as well as gender! I can't imagine it.


The characters are extraordinary.  Their personalities are well planned and the descriptions are vivid and colorful.  I found myself cringing when Durga or Jordana came around and smiling every time Edmund came on the scene.  The tattoos that people all had - for various reasons - were a great addition.  I found that I truly connected with the idea behind the meanings and their placement (laughed out loud at the talon tat that Mal got!).


The story is so well written that it was easy to get lost in the lives of the characters.  The variations in the classes is interesting and well done.  The are so many kinds of people in so many forms of service.  The author is truly both creative and a talented writer.


The world building is fantastic.  The author appears to have matched each place with the people who live there.  Garrick - unkind, corrupt, and power hungry as a person. Garrick the country is polluted, unclean, and inhabited by people who never have enough (not even enough food).  Allel is green and clean, accepting of all who live there regardless of social station and ruled by Edmund who is kind, generous, selfless, and dedicated.  The Red City is home to the chalices, bleeders, and sisters.  It has the best of everything, but expects everything in return and is power hungry in its own way.


The hinted at battle between the goddess Asherah and the god Samael was an intriguing element to the story, as was the whole Princess Mallory legend.  There is betrayal and loyalty, evil and love, as well as mystery and romance.  This story has a little bit of everything.


My favorite thing is that there is so much human nature in the story.  You watch as the characters determine who to trust and what is right, as opposed to what is expected by law or duty.
Creative, Imaginative, clever and well written!  Well worth a read - be sure to check it out!!!
Posted by Beverly at 7:30 AM