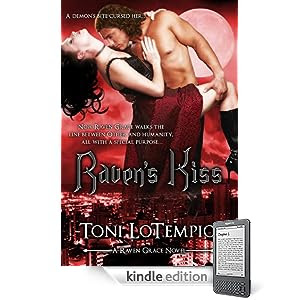 *I received this book (digital copy) at no charge in exchange for an honest review and participation in the blog tour.  The blog tour is being hosted by The Bookish Snob Tours.
Amazon Product Description:
Raven Grace was a college senior with ambitions of a career in law enforcement when she met the demon Aega, whose bite turned her from mortal to Shapeshifter. Now a member of the Recovery Organization, Raven keeps the peace between humans and errant Hellhounds, trolls, wizards and the like while trying to track down Aega and bring him to justice. After a particularly dicey encounter one night with a Hellhound, she goes to the aid of a girl who’s been attacked and near death—and is amazed to find Aega’s bite mark on the girl’s arm. Determined to get to the bottom of this, she revisits the victim’s apartment and there discovers her closet is a portal to a parallel universe, where people she knows lead vastly different lives. She also gets a glimpse of the Recovery Captain there—a six foot, redheaded Scotsman named Finn McPhee, whose sexy accent and even sexier bod sets her senses aflame. Seeking answers, Finn takes Raven to the magickal underworld, where an ancient fae informs them the demon’s quest is rooted in Scottish mythology and magick. As they delve deeper into legend, the truth comes to light—Aega is only a pawn, subservient to another, darker demon…a being who knows the truth about Raven’s heritage, and who orchestrated her return to this parallel universe for the ultimate showdown. Now, Finn and Raven find their passion for one another must take a backseat to Raven’s battle with a dark force who won’t be satisfied until he’s claimed her soul for his very own…
My Thoughts:
I LOVED this story!  This story grabbed me from the start and didn't let go until I had closed the cover after finishing the whole book!  I was captivated by both the story and the characters.
This is a story like nothing I have read - the author gives us parallel time coupled with modern day living and then adds in paranormals, ancient prophecies, mythology, and romance!  What more could a reader want?
The entire book is excellent.
The characters are wonderfully planned and carefully created - - in both times.  The author has given each person, with the exception of a few, a completely alternate life.  I was thrilled with the differences and similarities between each of the characters in each of the times.
Raven is great!  Bitten by a demon and turned into a Shapeshifter, she is the unlikeliest of heroines.  Sassy and tough on the outside, but unsure and troubled on the inside.
Finn, well what can a girl say about Finn...he is apparently every woman's dream. Sexy, dedicated, family oriented, loyal, attractive, and wealthy, all rolled up into a man with an accent to make you drool.
The secondary characters are as well-developed as the main characters and each one lends to the story as a whole.  My favorite supporting characters is Gwencha, without her something would be lost.
In short - wonderfully written, creatively told...a must read for those who enjoy a great story that fits into a variety of areas.  Highly recommended!
Be sure to head over to Amazon where you can get this FANTASTIC READ for a mere $0.99.
Posted by Beverly at 2:01 AM

thanks for the kind words :)