Welcome to The Wormhole and my stop on
Bryan Cohen's author blog tour!

Bryan Cohen is a writer, actor and comedian from Dresher, Pennsylvania. Since graduating from the University of North Carolina at Chapel Hill he has written four books (1,000 Creative Writing Prompts: Ideas for Blogs, Scripts, Stories and More, 500 Writing Prompts for Kids: First Grade through Fifth Grade, Sharpening the Pencil: Essays on Writing, Motivation, and Enjoying your Life, and Writer on the Side: How to Write Your Book Around Your 9 to 5 Job), several plays (Something from Nothing and Chekhov Kegstand: A Dorm Room Dramedy in Two Acts) and he was the head writer for an un-produced Web series (Covenant Coffee). His writing and motivation website Build Creative Writing Ideas has had over 100,000 visitors since it was founded in December 2008. He lives in Chicago, Illinois.
Follow Bryan on Twitter @buildcwideas. 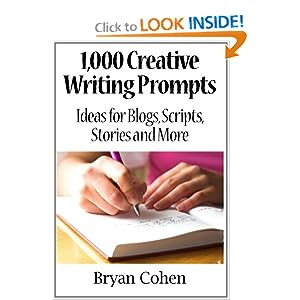 You can buy this at Amazon.com - click here
Posted by Beverly at 6:00 AM