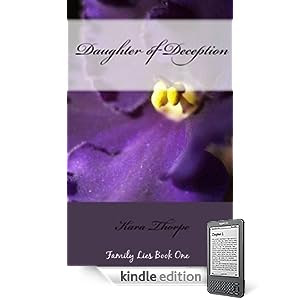 I received this book (digital copy) at no charge in exchange for an honest review and participation in the blog tour.  The blog tour is being hosted by The Bookish Snob Tours and will run May 20 - June 1, 2011.

That’s what clairvoyant Viola Ashwood has been her entire life. She wouldn’t mind quite so much if her father hadn’t been possessed by a powerful demon nearly a decade earlier. After recovering from a tragic confrontation with Daddy Dearest, Viola wants nothing more than to get back in to the federally-funded, but privately run, demon-hunting Network. Duke, her brother’s ex-best friend and the guy she’s crushed on since she was six, stands in her way. As Network regional head, Duke’s got plenty of reasons for keeping Viola out of his region, and that’s before he considers the fact that her father’s on the Network’s most wanted list

Just when Duke grudgingly allows Viola into the Network, her father - still possessed and more obsessed with Viola than ever - reappears. While trying to stay one step ahead of the demon, Viola struggles to overcome fears about her surprise demonic heritage while learning to control her new abilities - especially the one that has her raising zombie squirrels in the middle of the afternoon. Together, Duke and Viola deal with dangerous demons, centuries of family secrets, and a mysterious link that may bind them for life.

My thoughts:
I was hooked from the first page.  I couldn't hardly put this one down!
I fell in love with Tobias Duke and Viola Ashwood right away!  Kara Thorpe creates fantastic characters.  There isn't a character in the book that isn't well developed - even Finn (the dog) has a planned out personality.  Paul Duke (ghost) and Granny Aggie are so lovingly constructed that it was easy for me to find myself wishing that we all had people like that in our lives.
I was laughing out loud at Viola's snarkiness!
Here are a couple of my favorite scenes...
"You poisoned me."
"It's not like I was trying to kill you."
"You. Poisoned. Me."
"Viola rolled her eyes.  He sounded like a petulant child, but she knew better than to
actually verbalize that thought. "How long are you going to keep harping on that?" I
don't need an exact number; a ballpark figure will do."


"After a cursory scroll through the call log of her Network phone, he set it on the coffee
table.  His number, filed under the name Bane of My Existence, was the only recent
number called.  He was only mildly insulted.  He did, after all, have her listed as
Pain in the Ashwood in his phone."


The storyline and plot threads are well constructed.  The book is well-written and reads smoothly.  I level of deception and buried family secrets is terrifying - but I think that was the plan (considering the title and all).  I enjoyed the development of the different relationships throughout the story.

I would go so far as to call this one a MUST read!
I enjoyed it so much that I have already purchased
Book Two of the Family Lies Series: The Chaos Child.
Posted by Beverly at 6:00 AM