Book trailer for Flame of Surrender by Rhiannon Paille

You can buy a copy HERE. 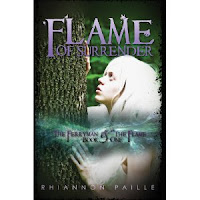 Amazon Product Description:
Bloom the weed of temptation and expire the great garden of life. Bloom the flower of sacrifice and sustain the great garden in strife. The boy who follows death meets the girl who could cause the apocalypse. Krishani thinks he's doomed until he meets Kaliel, the one girl on the island of Avristar who isn't afraid of him. She's unlike the other girls, she swims with merfolk, talks to trees and blooms flowers with her touch. What he doesn't know is that she's a flame, one of nine individually hand crafted weapons, hidden in the body of a seemingly harmless girl. Nobody has fallen in love with a flame until now. She becomes Krishani's refuge from the dreams of death and the weather abilities he can't control. Striking down thousand-year-old trees with lightning isn't something he tries to do, it just happens. When the Ferryman dies, Krishani knows he's the next and a lifetime of following death is his destiny. And Kaliel can't come with him. The Valtanyana are hunting the flames, the safest place for her is Avristar. Krishani can't bear to leave her, and one innocent mistake grants the Valtanyana access to their mystical island. They're coming for Kaliel, and they won't stop until every last living creature on Avristar is dead. She has to choose--hide, face them, or awaken the flame and potentially destroy herself.
Posted by Beverly at 1:20 PM