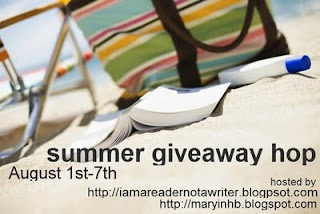 This giveaway hop is presented by I Am A Reader, Not A Writer and
Co-Hosted by Mary from BookHounds & Forever Young (adult).
Click HERE to go to the giveaway linky.

Welcome to The Wormhole!

I am giving away ONE hardcover copy of The Medusa Plot by Gordon Korman.
It is the first book in the Cahills vs. Vespers series of the 39 Clues.
Rules:
1. Be a follower of The Wormhole
2. 13+
3. Fill out the form below
Good luck and thanks for entering.
Posted by Beverly at 11:00 PM 4 comments

This virtual book tour is presented by Enchanted Book Promotions.
You can see the entire schedule HERE.
Welcome to The Wormhole and my day on the tour!
It is my pleasure to feature Karen Pokras Toz's books:
Nate Rocks the World and Nate Rocks the Boat 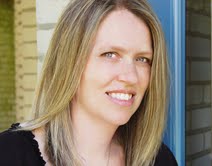 Karen Pokras Toz is a writer, wife, and mom. Karen grew up in Orange, Connecticut and currently lives outside of Philadelphia with her husband and three children. In June 2011, Karen published her first middle grade children’s novel for 7-12 year olds called Nate Rocks the World, followed in 2012 by the second book in the Nate Rocks series, Nate Rocks the Boat. Karen is a member of the Society of Children’s Book Writers & Illustrators (SCBWI).

Ten-year-old Nathan Rockledge cannot catch a break. After all, life as a fourth-grader can be hazardous what with science projects to deal with and recess football games to avoid. Everyone, including his best friend Tommy, seems to have bad luck when hanging around Nathan. Throw in an older sister who is a royal pain, a dad who is stuck in the past, and a mom who keeps trying to poison him with her awful cooking, and poor Nathan’s life as a fourth grader appears to be completely doomed. Armed only with his sketchpad, his imagination, and his wits, Nathan Rockledge navigates the perils of the fourth grade in style, to emerge heroic, as Nate Rocks, proving that even a ten-year-old can accomplish great things.

With fourth grade finally winding down, 10-year-old Nathan Rockledge is looking forward to a fun and relaxing summer at home with his friends. That is, until his mom decides he has to go to overnight camp with his annoying older sister.  When his best friend Tommy decides to tag along, Nathan thinks maybe his summer won’t actually be so bad. After all, he does get to be away from his mom's awful cooking for an entire six weeks.  Amongst Color War competitions, a flaky counselor, and a bully named "No-Neck,” Nathan turns to his trusty sketchpad, transforming himself into Nate Rocks: 10-year-old extraordinaire. His speedboat ready for action, Nate saves the day time and again from the perils of floods, snakes, ghosts, and even the most wanted criminals.

Join Nathan, Tommy, Abby, and a whole new cast of characters as Nate Rocks once again proves nothing can hold him back in this second book of the Nate Rocks series.