Book Blab is having a HUGE contest!

Lisa at Book Blab says:
"Alrighty folks....... my google friend follower may say 295, but my site feeder says 324!!! WOOT!!! Thank you sooo much and WELCOME to all of my new followers! And a GIANT thank you to all of you who have been following for some time now!!!"
The prizes are great!  The site is super!  Go check it out!!!
Posted by Beverly at 10:18 PM 0 comments

My friend Kathy and I went to see Patricia Briggs this last weekend.  She was signing books on Saturday in Minneapolis at Uncle Hugo's bookstore.  I am a new Patricia Briggs fan - found her in Strange Brew - after hearing about what a great author she is from my friend Kathy.

We arrived at the bookstore, after an amazing lunch at a fantastic deli, with our books to be signed: me with my very few (3) and Kathy with ... everything that Patricia Briggs has written (except the newest, which she intended to buy there).  It was wonderful, Patricia Briggs is truly a "real" person and was fun to chat with.  Here are pictures of us with her! 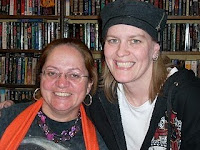 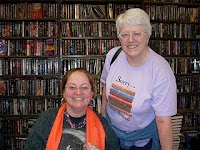 We are planning to go back to Uncle Hugo's to meet Robin Hobb in May - more photos to come!
Posted by Beverly at 3:59 PM 1 comments

April at Good Books & Wine has compiled a list of the top 100 YA books - you can check out more about the list here.  I have highlighted the ones I have read. Only 26 - I can't believe that I have just added SOOOOOO many more books to my TBR stack.

98. A Northern Light by Jennifer Donnelly

97. Among The Hidden by Margaret Peterson Haddix - have read this entire series.

94. The Goose Girl by Shannon Hale

90. An Abundance of Katherines by John Green

88. Marked by PC And Kristin Cast

87. Maximum Ride series by James Patterson -  I have just picked up a copy of FANG. The first one in this series is one of my all time favorite books!

86. The Perks of Being A Wallflower by Stephen Chbosky

84. I Am The Messenger by Markus Zusak

82. The Mediator series by Meg Cabot

81. The Truth About Forever by Sarah Dessen

78. Along For The Ride by Sarah Dessen

76. If I Stay by Gayle Foreman

75. Life As We Knew It series by Susan Beth Pfeffer

73. The Iron King by Julie Kagawa

66. A Tree Grows In Brooklyn by Betty Smith

64. The Curious Incident Of The Dog In The Night Time by Mark Haddon

63. The Island of the Blue Dolphins by Scott O'Dell

60. The Absolutely True Diary of a Part Time Indian by Sherman Alexie

55. The Vampire Diaries by LJ Smith

50. Number The Stars by Lois Lowry

49. Lord Of The Flies by William Golding

48. The Maze Runner by James Dashner

47. The Sisterhood of the Traveling Pants series by Ann Brashares  - have read only the first one.

46. Before I Fall by Lauren Oliver

45. The Summoning series by Kelley Armstrong

44. Thirteen Reasons Why by Jay Asher

39. The Graveyard Book by Neil Gaiman

38. Are You There Good? It's Me Margaret by Judy Blume

37. Looking For Alaska by John Green

35. A Great And Terrible Beauty series by Libba Bray

32. Romeo And Juliet by William Shakespeare

31. The Dark Divine by Bree Despain

29. Forest of Hands And Teeth by Carrie Ryan

27. The Outsiders by SE Hinton

26. The Catcher In The Rye by JD Salinger

25. The Princess Bride by William Goldman

22.Uglies series by Scott Westerfield - (I have read everything else by Westerfeld!)

15. Little Women by Louisa May Alcott

13. The Giver by Lois Lowry

10. Chronicles of Narnia by CS Lewis - I have read only the first one.

9. A Wrinkle In Time series by Madeline L'engle

7. Percy Jackson And The Olympians by Rick Riordan - have read only the first one.

5. Pride And Prejudice by Jane Austen

4. To Kill A Mockingbird by Harper Lee

1. The Hunger Games series by Suzanne Collins
Posted by Beverly at 1:47 PM 1 comments

Teaser Tuesdays is a weekly bookish meme, hosted by MizB of Should Be Reading. Anyone can play along! Just do the following:
Grab your current read - Open to a random page -
Share two (2) “teaser” sentences from somewhere on that page
BE CAREFUL NOT TO INCLUDE SPOILERS!
(make sure that what you share doesn’t give too much away! You don’t want to ruin the book for others!)
Share the title and author, too, so that other TT participants can add the book to their TBR Lists if they like your teasers!
"Pleeeaase can I turn them to stone?" Medusa begged.  "It's not the polite thing to do, dear," said Medusa's mom."  page 3 - Medusa Jones by Ross Collins

Angela at Reading Angel is having a contest!  100+ followers contest!  You can win great prizes for following a great blog!  Check it out!
Posted by Beverly at 9:24 AM 1 comments