Review: A Wrinkle in Time by Madeleine L'Engle 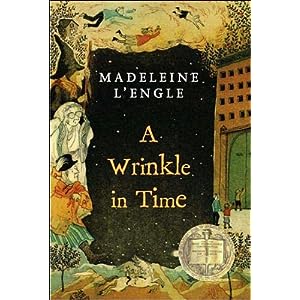 A Wrinkle in Time by Madeleine L'Engle
Amazon Product Description:
It was a dark and stormy night; Meg Murry, her small brother Charles Wallace, and her mother had come down to the kitchen for a midnight snack when they were upset by the arrival of a most disturbing stranger.

"Wild nights are my glory," the unearthly stranger told them. "I just got caught in a downdraft and blown off course. Let me sit down for a moment, and then I'll be on my way. Speaking of ways, by the way, there is such a thing as a tesseract."

A tesseract (in case the reader doesn't know) is a wrinkle in time. To tell more would rob the reader of the enjoyment of Miss L'Engle's unusual book. A Wrinkle in Time, winner of the Newbery Medal in 1963, is the story of the adventures in space and time of Meg, Charles Wallace, and Calvin O'Keefe (athlete, student, and one of the most popular boys in high school). They are in search of Meg's father, a scientist who disappeared while engaged in secret work for the government on the tesseract problem.


My thoughts:
Fabulous story.  I have always wanted to read this one and recently had the opportunity to listen to the unabridged audio (read by the author)and am in love with her style.
The language is captivating and visual.  I was thrilled by the characters.  The human characters are interesting and well developed.  The non-human characters are something more than I could have ever imagined or created.  The story is entertaining and has a depth that I haven't found in ages.
This story has a bit of everything; fantasy, science fiction, adventure, coming of age and even just a touch of romance (the true love of the parents and the hint of the possibility of a future romance for Meg and Calvin). The concepts are magnificent.  The imagination of the author comes to life in this thrilling tale filled with the power of love, a person's ability to believe in themselves and the idea of faith.
I can't wait to read the rest of the series.
Posted by Beverly at 1:01 PM 2 comments