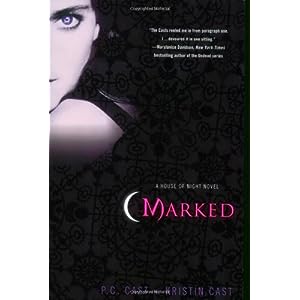 The House of Night series is set in a world very much like our own, except in 16-year-old Zoey Redbird's world, vampyres have always existed.  In this first book in the series, Zoey enters the House of Night, a school where, after having undergone the Change, she will train to become an adult vampire--that is, if she makes it through the Change.  Not all of those who are chosen do.  It's tough to begin a new life, away from her parents and friends, and on top of that, Zoey finds she is no average fledgling.  She has been Marked as special by the vampyre Goddess, Nyx.  But she is not the only fledgling at the House of Night with special powers.  When she discovers that the leader of the Dark Daughters, the school's most elite club, is misusing her Goddess-given gifts, Zoey must look deep within herself for the courage to embrace her destiny--with a little help from her new vampyre friends.

My Thoughts:
I can't believe it took me so long to read this book!  I have been hearing great things about this series for a couple years now and have kept them on my TBR pile anyhow, hoping that the series would finish and I could read all the books over summer break or some other break from school.  Wow! I am soooooooo glad I decided to start reading them now!
I was HOOKED from the go!  I was impressed with the world building, the characters, and the storyline, I guess there wasn't anything I didn't like.
Zoey's grandmother is probably my favorite character, although we don't see her many times during the book, she plays an enormous role in the story and in Zoey's life.  She is an amazing woman who is always there for Zoey - no matter what.  Her lessons and advice, coupled with the voice of the goddess, should make Zoey a formidable character throughout the books in the series.
This story differs from many vampyre novels I have read in many ways, but I found myself truly enjoying those differences.
I was thrilled by Zoey's friends and their level of devotion.  I was in tears at the end - no spoilers...so I guess that's it on that.  I found myself laughing, crying, on the edge of my seat, outraged by behavior, and enjoyed every minute of it!

I enjoyed the book very much, it was well written, well thought-out, and wonderfully put together.  I would suggest this one
to any number of people, boys and girls alike.
I can't wait to learn more about Zoey's world in book 2: Betrayed.
Posted by Beverly at 9:48 PM 0 comments