Be Careful What You Wish For: Saga of the New Gods by Daniel Black

The time has come, Hell's gates shall be thrown wide and the power of creation shall run rampant upon the earth.
In this, the first book of the “Saga of the New Gods,” a group of young college students bring about Armageddon in the most literal sense of the word. With a simple wish upon a unique wedding band given to him by his love, Michelle, Adam unleashes a power that could – if left to reign unchecked – destroy the entire world…
The story begins with a couple of young women, Chelsea and Michelle, bearers of a tragic past, fighting to create a future for themselves. They travel to an old pawn shop in the town of Athens, Ohio, and purchase a ring for Michelle to give to her love, Adam, in the hopes of becoming his wife. A poorly timed wish after the gift of the ring has dire consequences however, as magic enters the world. All that they know, or have known, begins to come unraveled as first their comfortable existence in this bucolic town is ripped from them, then their future. They reach their moment of greatest despair as one of their number flees, another lays near death, and another sleeps in a state akin to a coma… In this moment of vulnerability a man arrives offering a glimmer of hope, Mathew Banks, a federal officer, arrives with the dawn to take them to a place of safety and security. But what is secure when the very laws that govern reality begin to unravel? What is safe when those who watch over you risk change from day to day, moment to moment, and even those who are your closest friends deceive you and risk more than your lives, but the very souls that make you who you are?
This first story tells the tale of the creation of this new world, as the series continues you will rise to the heights of this world and others, and to the very depths of hell. 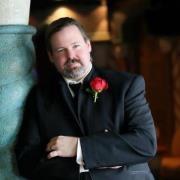 Daniel has joined us for an interview:

 When did you first realize you wanted to be a writer?
My primary interest in becoming a writer originated in elementary school. When I was going to elementary school, they discovered I had a learning disorder, which was later classified as Autism. They also discovered I had a rather higher than normal IQ. So they sent me to a special school on Pearl Harbor called Assets.

At Assets, I met Mrs. Chuck Lee, a school teacher. As a class assignment she had everyone in the class write a short story, just four pages, but even so short a paper was torture for me. You see, part of my learning disability was that small motions caused sharp pains in me, so writing, literally, hurt. However, as soon as my pen touched the page, and I began writing the story, my imagination jumped up and took over, before I was done I had written a sixteen page story instead of the four page short story originally assigned, and from that day on, I was a writer.

I have had many jobs, from demolitions to real estate, and from the vice president of a corporation to a bouncer in a seedy strip joint. I only recently left a career as a medical courier to become a full time author, and I prefer it greatly.

 What would you say is your most interesting writing quirk?
I’d have to say it’s that my characters act like real people. I am an avid reader, and one of the things that has always bothered me about the characters in books is they are too... steadfast... the good guys are good and honorable, the bad guys wear metaphorical black hats and eat babies and kittens. My good guys have issues, my bad guys are trying to do good as they see it, and everyone makes excuses for what they do. I don’t know if this is necessarily a quirk, but it is one of the basic tenants of my writing style, my characters are real, real people in incredible situations, but real nonetheless.

 Where do you get your ideas or inspiration for your characters?
From everyone I meet. I have said this in comments on Facebook, and in conversations with people, I draw inspiration from real people because my goal is to make my characters feel real. People don’t do bad things because they have some sort of diabolical hunger to wipe out mankind, they do it because they want power, or wealth, or even just attention. The overall impression I have gotten of humanity is that for the most part we are scared and lonely; this causes us to lash out at people who we are jealous of because we interpret them as not being scared and lonely, further scaring them and making them feel alone. It is a vicious cycle, and one of the horrors of our existence.

The good guys in my book are that way because they have one another, and (somewhat) trust one another.

 How do you decide what you want to write about?
Well, for the foreseeable future I will be writing about my fantasy world “New Earth” where the events of the “Saga of the New Gods” take place. I have ten novels already in mind for this world, broken into three trilogies and a standalone novel.

I will also be offering up my world to other fantasy writers at a later date, as I could no more tell all the stories in “New Earth” than I could in the old one.

 What books have most influenced your life?
This is a long list *Chuckle* I have read more than ten thousand novels, as well as several thousand nonfiction text’s, including two versions of the dictionary (was stuck on a ship with nothing to read, was horrible, the plot was predictable, very few surprises).

If I had to choose one author that has had the greatest impact upon me though, I would have to say that would be Robert A. Heinlein. RAH was the first author I ever read, and I devoured everything he wrote, including his nonfiction work.

 What are you reading right now?
I just finished rereading the “Drizzt Do’Urden” novels by R.A. Salvatore, and am now going on to reread “The Dresden Files” by Jim Butcher.

 What do you like to do when you are not writing?
I enjoy reading; spending time with my wife and my cat’s, lazy Sunday morning’s watching television and laughing about Sheldon and Leonard, playing video games with my wife, playing pen and paper role playing games with a small group of friends, or going to the movies. My life is very quiet, and mostly sedentary.

A sedentary sleepy existence is pretty much my idea of heaven at this point. In the past my life was very active, frequently terrifying, and always interesting. My old life has left me with a great deal of knowledge (much of which I wish I could unlearn), a great many scars-of both the visible and non visible variety-and an abiding wish to make the world a better place.

I can only hope that my old life will improve my novels, and make them more enjoyable for the reader.

 What is your favorite comfort food?
Anything that has enough caffeine in it to jump start an elephant, and Lefse, which is a Scandinavian pastry made from potatoes.

 What do you think makes a good story?
Everyone has their own reason for reading, their own idea of what makes a story engrossing. For me, it is when I can see myself in a character, can become the character as the story plays out behind my eyes.

 Who would you consider your favorite author and why?
Again, long list; but if I had to choose one, it would have to be Robert A. Heinlein. The books he wrote were about people, people in unusual situations, people from the point of view of a different time, but people.

Fun random questions:
• dogs or cats?
I am an animal lover, I presently have two cats, one of which is curled up beside me as I write, and we are planning on getting some dogs here soon as well. Pet’s make everything better.

• Coffee or tea?
Coffee. I drink Tea on occasion, but I make it so strong that it tends to come out as black as coffee (see question above on comfort food).

• Dark or milk chocolate?
Milk; not because there is anything wrong with dark chocolate, I just think it is a bit bitter for my corn syrup saturated palette.

• Rocks or flowers?
Rocks, definitely rocks, they don’t die, they look good in my rock garden, and I don’t have to go outside and tend to them.

• Night or day?
Night, though this one is not by choice; I was wounded while in the military in a most horrible manner, and the majority of my body is covered in scar tissue. This has resulted in my body not being able to regulate heat well. I am good so long as the temperature doesn’t get above eighty, but above that I become very ill.

• Pens or pencils?
Pencils, I like being able to go back and erase something if it doesn’t look right.

More about the author:

Hello, my name is Daniel Black.
My wife and I currently broil... I mean live... in the city of Austin, TX, with our one and a half cats, Anya, and Bella.
2012 was an incredibly busy year for me. At long last I was finally able to become a full time author, I got married to my lovely Kimberly, and sadly, my mother lost her fight with cancer after two years of struggle.
But that is depressing; on to happier things...
I write primarily Fantasy, though I also have a Science Fiction novel in the works. My Fantasy is a harsher, grittier, form of Fantasy than most. I write about real people in fantastic situations, I draw from psychology texts in order to properly portray reactions to situations, as well as experiences in my own life and imagination to help.
There's not much more to say, but that I intend to keep on writing until they nail shut my coffin, same as The Master writer Robert Jordan, and here's hoping with equal success.